Signs of the collapse of the world financial system have emerged, causing great panic to people all over the world. Many governments called upon economists and experts to find a way out. Financial institutions and their agents began to think about rescue plans.

Many people rushed to draw their deposits from banks. At the same time, several financial institutions have frozen the process of granting loans to companies and individuals for fear that it might be difficult to take them back.

The drop in the circulation of money among individuals, companies and financial institutions has given rise to a sharp slowdown in the economic activity. As a consequence, debtors have become unable to pay back their debts.

Wall Street meltdown dealt a severe blow to the level of exchanges in money and exchange markets causing indexes to fluctuate. Furthermore, used capacities in companies were decreased due to the decrease in financial flow and the inability to take loans from financial institutions, except at high interest rates with heavy guarantees. 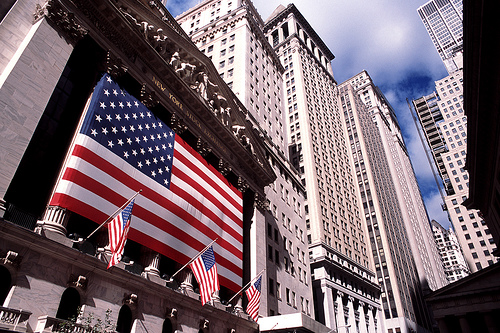 This shortage of financial flow decreased consumption of certain commodities, like cars and real estate sector. The drop in consumption decreases savings, investment projects, and hence increases unemployment which is eerily climb as many companies become bankrupt threatening many employees to lose their jobs.

Causes of the Crisis

Maurice Allais, an expert on world economy and a Nobel Prize laureate in economics, said, “The world economic system is based on some concepts and rules that will be the very cause of its destruction unless treated and rectified quickly.”

In fact, many economists argue that the neo-capitalist world economic system rests on principles that will lead to its ruin.

It can be argued that among the reasons that led to the crisis is the spread of moral economic corruption, such as exploitation, lying, circulation of prejudiced rumors, cheating, monopoly and the engagement of nominal transactions, with no real value. In this way, the wealthy and creditors oppress the poor and debtors who, as a consequence of being unable to bear such oppression anymore or pay back these debts and loans, will grumble and be resentful.

Also, wealth has become a weapon used to dominate and control politics around the world. Money has become the idol the capitalist economy.

Interest-backed banking system inflicts mounting debts on consumers by working within the framework of the system of trading debts, either by selling, buying or brokerage.

Credit card debt inflicts high costs on the consumer, and when one can not pay back his debts, the interest rate is continuously increased. Ultimately, consumer’s property will be confiscated in order to guarantee security. This has actually happened to many holders of such credit cards, causing an imbalance of their house budgets.

Indeed, banks impose additional burdens on the borrower who is not able yet to discharge the first loan due to the increasingly higher rate of interest. This is similar to usurers in the pre-Islamic period of Ignorance who would say to a debtor, “Either you repay or augment.”

Furthermore, Stock brokerage firms deceives those in need of loans as they claim high commission payment if there are potential risks, leaving the poor debtors to bear their burden and attributed negative consequences.

Actually, Some economists believe that no real development or wise employment of the means of production could be achieved unless the interest rate is zero. This view was held by Adam Smith, the Father of modern economics.

Furthermore, economists think that the alternative is based on participating in profit and loss, because it brings about stability and security. In addition, interest-based system results in the accumulation of wealth in the hands of few people who will thus be in control of the world’s fortunes.

In addition, The world financial system rests on the basis of the financial derivatives system that depends mainly on nominal transactions, with no real exchanges of goods or services. What is even worse is that most of these transactions are based on credits taken from banks in the form of loans, and when things develop unfavorably all that collapses triggering the financial crisis.

The current financial crisis debunks the myths of Capitalism, opening the way for alternative economic systems to emerge, among which is the Islamic finance and economy.

Yet, instead of just reacting to the crisis, scholars of Islamic economics ought to explain the concepts and principles of the Islamic financial and economic system and present its reference and applications to wider audience.

The Islamic economic and financial system is based on a set of values, ideals, and morals, such as honesty, credibility, transparency, clear evidence, facilitation, co-operation, complementarity ,and solidarity.

These morals and ideals are fundamental because they ensure stability, security, and safety for all those involved in financial transactions. Furthermore, the Islamic Shari`ah prohibits the economic and financial transactions that involve lying, gambling, cheating, gharar (risk-taking), gahalah (unawareness), monopoly, exploitation, greed, unfairness, and taking people’s money unjustly.

In addition, Islamic economy  promotes participation in profit, loss, and actual exchanges of money and assets. In fact, there should be real interaction between the wealthy, employers, the employees, and financial experts.

There is no party who is a constant winner or a constant loser; yet profit and loss is mutually shared.

Regarding debts, Shari`ah prohibits all forms of selling debts, like discounting promissory notes and checks with postponed payments. Also forbidden under the Shari`ah is the scheduling of debts at a higher interest rate. Prophet Muhammad (peace and blessings be upon him) forbade the sale of debts. In fact, economists contend that selling debts has exacerbated the financial crisis.

Actually, the Islamic economic and financial system makes it easier for the borrower to repay debts. Almighty Allah says: “And in case any person is under difficulty, then he should (be granted) a respite to (the time of) ease…” (Chapter 2: Verse 280).

Shari`ah allows for a system of funding and investment based on participation in both profit and loss and interaction between capital and labor. Shari`ah calls on the parties involved in transactions to behave in a truthful, honest, clear and transparent way by prohibiting gharar, gahalah, cheating, gambling, lying, rumors, exploitation and taking people’s money unjustly.

In a word, the only way out of this crisis can be found in the principles and regulations of the Islamic economics

Ruling on Debt Trading in Shariah

How Islamic Bank Complying With Shariah?